Signs Your AC System Is Going Out

There are very few situations when an AC system suddenly stops working without exhibiting signs beforehand. This is an important thing to know because it can often help you avoid being blindsided by the need for new AC installation in Snellville, GA. You can be more prepared to replace your AC unit if you recognize a few important signs that your system is failing. Here’s what you need to know.

Warm air is a sure sign that something is wrong with your AC; unfortunately, it can often mean that the AC needs repairs that are difficult to justify when compared with the cost of a new system. This is because warm air is often caused by a failed compressor, which is a very expensive part to replace. In fact, most AC repair companies will recommend replacing the entire unit rather than the compressor alone.

Weak airflow is another indication that the compressor is going bad. This is especially true if you notice that the air coming from the registers seems weak in every room in the house. In some cases weak airflow could be caused by duct work that’s in need of repai r or a blockage. It may also be caused by a combination of factors that warrants replacement of the AC system.

When your AC system begins to fail, you’ll often notice strange sounds besides the usual hum of a properly-working system. These sounds could be from parts that have broken off or are worn out, so the sounds will usually be very noticeable. These problems can cause grating, grinding, clanging, or knocking sounds. In any case, these sounds are concerning, and you need to contact an AC technician right away because the sounds could be caused by a problem that a repair could fix. But if left unchecked, the problem could quickly ruin the rest of your system and necessitate replacement.

Foul odors are another thing to watch for, especially if you’ve been noticing other signs of a failing AC. Burning electrical smells often indicate that the wire insulation has burned up, so if this is identified early enough, you may be able to have the wiring replaced instead of the entire system. If you notice a musty or moldy smell when the AC runs, there could be mold growing in either the AC unit itself or in the ductwork. This indicates that there are probably other problems with moisture that need to be addressed in addition to having all the mold cleaned out.

High energy bills with no explanation are frequently cause by an AC system that’s wearing out and having difficulty cooling your home efficiently. Whether you notice the change in your bill suddenly with an abrupt spike or notice a gradual increase over the summer, higher bills are of concern because they likely mean that your system is worn out and needs to be replaced.

The only leaking you should notice from your AC system is from the primary condensate drain line. The amount of water should be minimal, with the exception of hotter days when the AC runs more frequently. But if you notice large amounts of water or a puddle, there could be issues with the condensate line or with the coils freezing up. Either of these problems mean you need to contact AC repair service in Snellville, GA. Freezing coils could also be a sign that you need a new AC. Whether you need repair or new installation, call Triad Mechanical for your AC needs today. 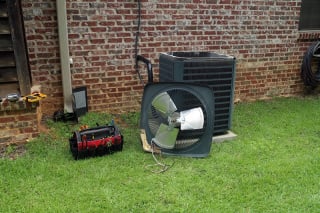